Diarrhea and digestive health can be a huge problem among dogs so if you haven’t heard about Saccharomyces boulardii (shortened to S. boulardii) and how it can help your dog … you’ll want to learn all about it.

S. boulardii is a yeast … but it’s a friendly yeast that’s a probiotic. And it manages diarrhea … very well! It’s especially valuable in managing antibiotic-associated diarrhea. And it’s not just a bandaid solution … it actually gets to the root of the problem.

Let’s look at what makes S. boulardii for dogs different from other probiotics, and then we’ll look at it in depth.

What Does S. Boulardii Do?

The most important thing about S. boulardii is that it moves through the gastrointestinal system intact. Because it doesn’t break down and weaken in the digestive process, it can accumulate and concentrate in the intestines where the problems exist. Because S. boulardii is at full strength, it can fight intestinal infections caused by Clostridium difficile and Escherichia coli. (1)

S. boulardii attacks these pathogenic bacteria and also stops the transmission of genetic material that can establish antibiotic resistance. This is a distinct advantage over yogurt and most other probiotic foods and supplements given to dogs.

What Is S. Boulardii?

Saccharomyces boulardii is a tropical yeast discovered in the 1920s by French scientist Henri Boulard. He isolated this yeast after witnessing natives of Indonesia chewing on lychee and mangosteen skin to ease symptoms of cholera.

It’s become one of the most researched probiotics in the world. In addition to its value in managing GI issues and diarrhea, it’s been studied as a possible solution for various health problems. Research has looked into its effect on …

How S. Boulardii For Dogs Helps

S. boulardii calms the digestive system and protects your dog’s intestines from pathogens and intruders. It also balances parts of your dog’s immune system to maintain intestinal barriers. When there’s damage to the intestinal barrier, it can lead to GI diseases. It’s a probiotic that brings health benefits to the GI system and ultimately, the immune system … plus it stops diarrhea!

Most importantly, S. boulardii prevents diarrhea specifically caused by antibiotic use (2). So if your dog has had antibiotics or needs to take them, he needs S. boulardii as well. S.boulardii survives antibiotics so you can give it while you’re treating your dog with these drugs.

Is S. Boulardii Safe For Dogs?

S. boulardii is safe for dogs. Plus it’s the probiotic with the most supportive research for veterinary use. In a recent trial, S. boulardii performed against acute and chronic diarrhea in humans … and a trial in dogs had the same benefits. So S. boulardii is an excellent addition to your dog’s probiotic regimen (3).

And here’s why probiotics are important for your dog.

Your dog’s gut health is vital because about 90% of his immune system lives in his gut. This means a healthy gut helps protect him from disease and illness. And probiotics (beneficial bacteria) play a major role in your dog’s gut health. They break down food into nutrients to be absorbed into the body. They crowd out bad bacteria and increase acidity so bacteria that cause disease cannot thrive and spread. Short-chain fatty acids (SCFA) are also produced through the breakdown of food. And SCFAs have many other important roles in the body’s immune system.

In 2018, a study found that S. boulardii and soil-based probiotics (Bacillus subtiliis and Bacillus coagulans) are the best probiotics to replenish your dog’s microbiome and stop diarrhea after antibiotics (4). Soil-based probiotics are spore-forming … they have a hard coating that protects them from heat, stomach acids, and most antibiotics. They’re able to survive the journey through your dog’s system, which leaves them at full-strength when they reach the colon. This is where they colonize to fight pathogenic bacteria.

The study also found that Lactobacillus probiotics are not the best choice to use after antibiotics. It actually caused a delay in microbiome recovery compared to the trial group given no probiotics.

Benefits of S. Boulardii For Dogs

S. boulardii manages and prevents many forms of diarrhea related to:

Plus it does this:

Yes, it does. Research shows S. boulardii is effective against Candida. It produces caprylic acid that breaks down biofilms that protect yeast and help it thrive (6). And it also helps calm digestive issues caused by chronic inflammation.

How To Give S. Boulardii To Your Dog

There are several times when you want to give your dog S. boulardii, such as:

There aren’t really any food sources for S. boulardii as it comes from the ground skins of lychee fruit. You can buy it as a supplement so you’ll find S. boulardii online or over-the-counter in capsules or powder. Look for organically sourced ingredients with no added fillers.

Add S. boulardii directly to your dog’s meals. Be sure he gets liquids to revitalize the yeast and aid digestion. Follow product directions. If you buy a human product, assume dosing is for a 150 lb person and adjust for your dog’s size.

In studies, 250-600 mg is used as a child’s dose over 4-6 days. That totals 5-10 billion colony-forming units (CFUs). It survives in the gut and lasts longer than dairy-based probiotics so you don’t need to give it as much as other probiotics. You can give a half-billion to 5 billion CFUs to dogs.

You can help manage your dog’s diarrhea and other digestive problems with S. boulardii … and for his overall gut health as well. It’s never too late to strengthen your dog’s immune system with S. boulardii … before disease sets in. Enjoy its multiple benefits as you use it to prevent and manage gut problems. 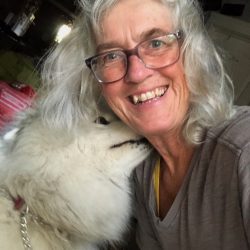 How To Manage EPI In Dogs